Switch To Us Water Efficiency About us Our Services 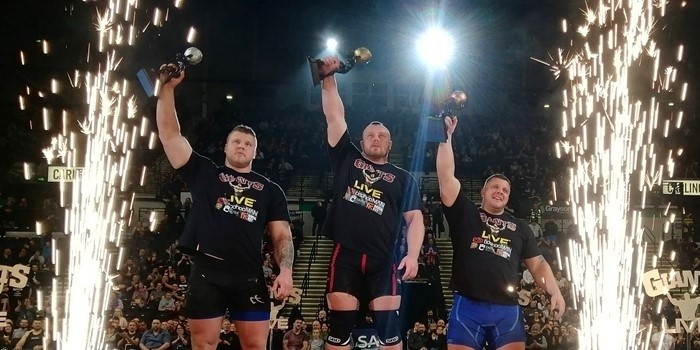 A sell-out crowd raised the roof at the FlyDSA Arena Sheffield as Adam Bishop lifted the Britain’s Strongest Man trophy with just a 0.5-point lead ahead of Scotland’s Tom Stoltman who smashed the Castle Stones World Record in a jaw-dropping 16.01 seconds.

The Castle Water sponsored ‘Giants Live Arena Tour 2020’ got off to a roaring start in Sheffield on 18 January 2020 as Britain’s Strongest Man attracted the largest audience in the history of the competition to date.

With 2019 winner, Graham Hicks, opting not to defend his title, Britain’s Strongest Man was blown wide open in front of a sell-out crowd of over 8,000 people who had gathered to watch the UK’s top strength athletes battle for glory.

Wales’ Strongest Man, Ben ‘the Badger’ Brunning, Ireland’s Strongest Man, Pa O’Dwyer, and Scotland’s Strongest Man, Tom ‘the Albatross’ Stoltman, were joined by highly respected opponents including Mark Felix and Terry Hollands as well as a number of newcomers to the competition. However, the focus fell on those contenders who had reached the World’s Strongest Man Grand Final in 2019: Castle Water-sponsored Tom and Luke Stoltman, and Harlequins Coach, Adam Bishop.

The rivals battled it out over five feats of strength, culminating with the newly christened Castle Stones in honour of event sponsor, Castle Water. The atmosphere was electric as the scores remained incredibly tight between Bishop and the Stoltman brothers throughout.

With the end in sight, the competitors pulled on every reserve of strength for the final event - the Castle Stones. Starting at 100kg and concluding with a colossal 180kg, lifting and loading these huge rocks takes years of dedication and practice to perfect. Just one slip can mean the difference between glory and disaster.

Leading the pack, Luke Stoltman set the pace achieving a personal Stones best of 20.65, before brother, Tom, went head to head with Adam Bishop in the final run. The two giants raced against the clock to the thunderous roar of the crowd, but it was Tom Stoltman who not only retained his King of Stones crown, but also rocked home with an astounding new World Record of just 16.01 seconds.

With such a phenomenal last stand, the tension was palpable as the crowd awaited the final result. Then, to a deafening ovation, Britain’s Strongest Man 2020 was over. Adam Bishop had snatched victory with 56 points - just half a point ahead of Tom Stoltman on 55.5 points. Luke Stoltman took third place with 52.5 points, a massive 11 points ahead of the next contender, Luke Richardson, demonstrating the incredible calibre of Britain’s top three.

On winning the title, Bishop said:

It feels amazing. It's the culmination of a lot of hard training. My goal was to win Britain’s Strongest Man, it always is. This year I made big changes in my training and thankfully it’s paid off.

Bishop now has his sights set on becoming Europe's Strongest Man at the next Giants Live arena event at Leeds First Direct Arena on Saturday, April 4.

It’s been an unbelievable show, it’s been so close - tooth and nail right to the end. Adam Bishop has taken it, with the Stoltman brothers on the podium just behind him, but it was his time. He’s unbelievably strong. Tom and Luke will have their time, but it was Adam’s time this time.

In looking ahead for the Giants Live 2020 Tour, Sadler added: “The next step for these guys now is Europe’s Strongest Man where they’ll go up against current European champ, ex World's Strongest Man and TV's Games Of Thrones star, Hafþór ‘Thor’ Björnsson and all the big guys from the rest of Europe. Taking place at Leeds Arena on 4 April, it’s going to be another awesome event!”

Tickets for Giants Live Europe’s Strongest Man at the First Direct Arena in Leeds are on sale now.

Britain’s Strongest Man 2021 will return to FlyDSA Arena on 16 January 2021 and tickets are also available now.

For more information and all the latest results visit giants-live.com. 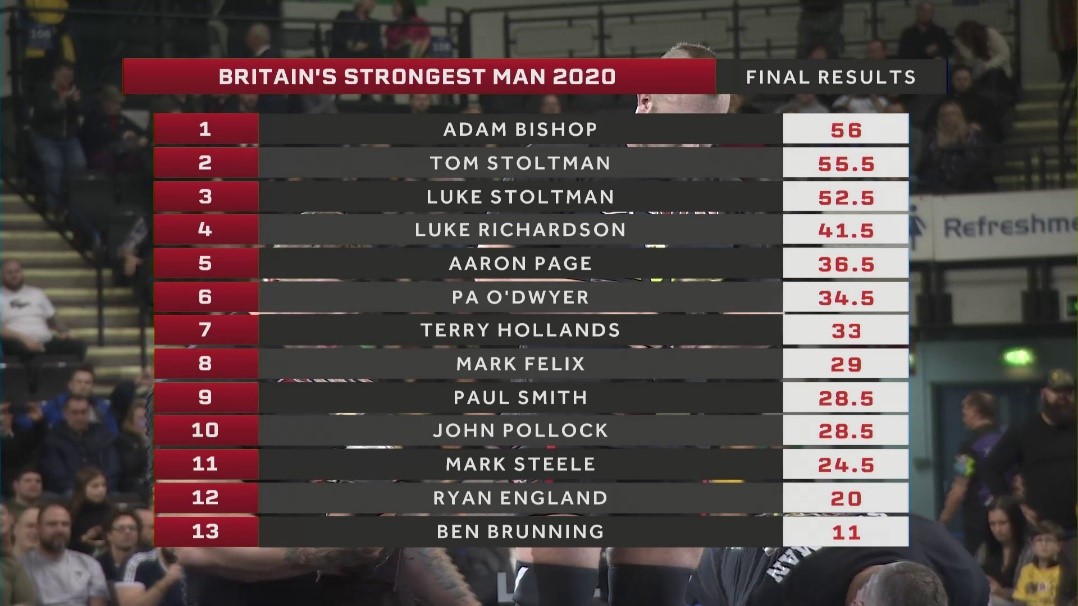