What is water pollution and what causes it?

Home Blog What is water pollution and what causes it?

According to Britannica, Water pollution is: “the release of substances into subsurface groundwater or into lakes, streams, rivers, estuaries, and oceans to the point where the substances interfere with beneficial use of the water or with the natural functioning of ecosystems”.

Most water pollution is, sadly, directly caused by humans. By discharging waste into the water system, whether it’s by accident or deliberately, the pollution poisons wildlife and destroys animal habitats. Here are the main culprits…

Plastics and other rubbish

We all know that plastic pollution is a huge problem, and we’re familiar with photographs and footage of distressed marine life trapped in plastic bags and food and drink packaging. But the effects of plastic pollution go even further. When plastic does break down, it becomes a different problem, in the form of microplastics. These tiny particles of plastics do not disappear, but do get eaten by fish and marine life, ultimately ending up in the food chain. The microplastics are toxic to animals of all kinds, so it’s in our self-interest to tackle the problem.

It isn’t only plastics that cause pollution in the water. It’s amazing what people will dump in their local river, whether it’s bicycles, supermarket trolleys, garden waste and even their old electronics. Not only does this cause pollution and harms wildlife, it also increases the risk of localised flooding.

When an oil tanker spills its cargo, it makes headline news, and prompts a massive clean-up operation. However, this accounts for only around 10% of the one million tons of oil that get into our global waters every year. Oil pollution comes from legal as well as illegal shipping discharges, accidental spills, and oil that seeps into the water from manufacturing plants, farms and built-up areas. Oil is bad for the environment because it reduces oxygen in the water, makes drinking water unsafe and destroys the ecosystem. 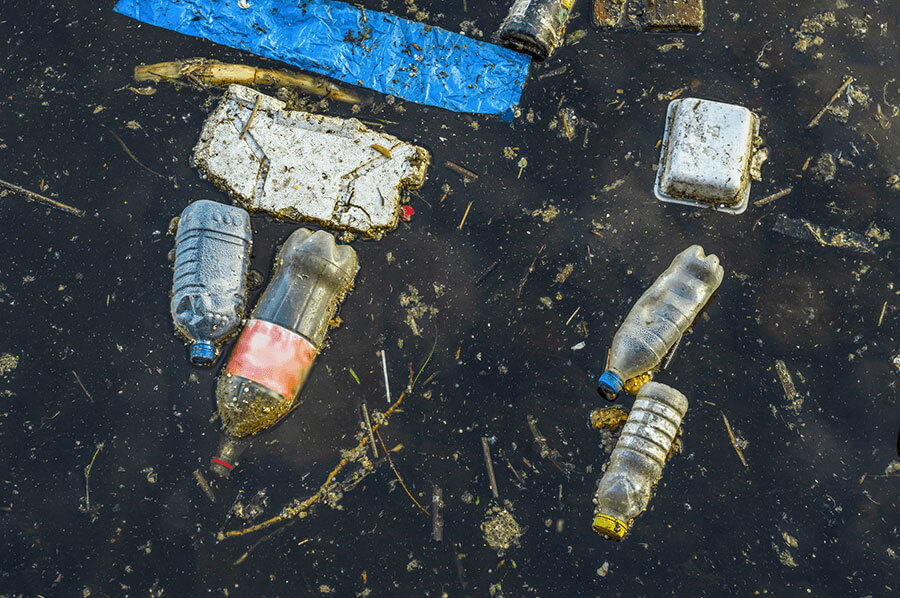 Radioactive waste is defined as any pollutant that emits more radiation than naturally occurs in the environment. We use radioactive substances in many everyday objects such as watches, television and luminous clocks, as well as in nuclear power plants, and the medical, industrial and science sectors. Radioactive pollution can stay in the environment for thousands of years.

Farming produces a lot of water pollution - every time it rains the chemicals from fertilisers, pesticides, slurries, sheep dip, manure and bacteria are washed into rivers and waterways. The pollution caused by nitrogen and phosphorus is the primary threat to the quality of water and can cause algal blooms, which are toxic blue-green algae that depletes oxygen, resulting in so-called ‘dead zones’ that are increasing in size every year.  The good news is that there are many ways to increase water efficiency in agriculture that lead to a positive impact on economic and environmental sustainability.

According to the World Health Organisation: “Globally, at least 2 billion people use a drinking water source contaminated with faeces”. Water contaminated by sewage is dangerous to humans as it can transmit fatal diseases such as cholera and typhoid.

It’s estimated that, globally, more than 80% of wastewater flows back into the environment without being treated, allowing pollutants such as pathogens, phosphorus, nitrogen, chemicals, and heavy metals to enter the water.

Blocked drains and sewers are bad news for businesses. Every year, tens of thousands of litres of fat, oil and grease (FOG) are poured down sinks. When fat, cooking oil and grease cools it forms a solid mass which can easily block pipes and cause flooding. The resulting disruption, damage to local trade and loss of profits can be significant, but your business can fight back against fatbergs. If your business limits the oils it washes down the sink and stops sending unflushables such as wet wipes into the sewers, you can help prevent fatbergs impacting your business.

What can we do to reduce water pollution?

As a business and as individuals, there’s always something that can be done to help. Do what you can to reduce plastic consumption, whether that’s buying unpackaged products when you shop, or finding alternatives to plastic packaging for your company’s products. Minimise the amount of chemicals and oils that you put down the drain, especially important for businesses in the Industrial and Manufacturing sector, and businesses that dispose of trade effluent. Make sure your car or fleet of company cars are well maintained, and check to make sure there are no leaks so oil and antifreeze/coolant don’t have the chance to leak onto the ground.